What's a ScramJet?!? It's a form of jet engine in which combustion takes place in a stream of gas moving at supersonic speed. In other words: it's Fast! Like from LAX to Sydney in 1.5 hours Fast! Forbes has a neat article about the ScramJet here!
The ScramJet (Surfboard) is the fastest board I've ever ridden. Making it around closeout sections that weren't possible before. Opening your mind to new ideas is hard but once you try this type of design it's tough to go back to your standard conventional shortboard.
The board has a nice scoop in the nose for making drops on steep waves. Subtle curve in the front middle of the board and flat from the center point to the tail. Since the board is so short it fits the curve of the wave when going vertical, but because of the flat rocker it still works in the slow/flat sections of the wave. It has a single to double concave to vee out the tail.     I'm 6'0 185 and ride mine at  5'5" x 19.25" x 2.5" @ 30.5L .  Though I've ridden this board in well overhead surf it works best in the head high to waist-knee high surf. This board will replace your standard shortboard and fish. When people ask about "The Scramjet" I say, "it catches waves like a fish/hybrid but feels and performs like a Shortboard." Ride the board as a Thruster when it's more open faced waves or when you know you'll just be doing vertical snaps and carves. Ride it as a Quad when it's a down the line point break style waves or when it gets hollow. And ride it as a twin fin when it small and crappy and you're just looking to Cruz! 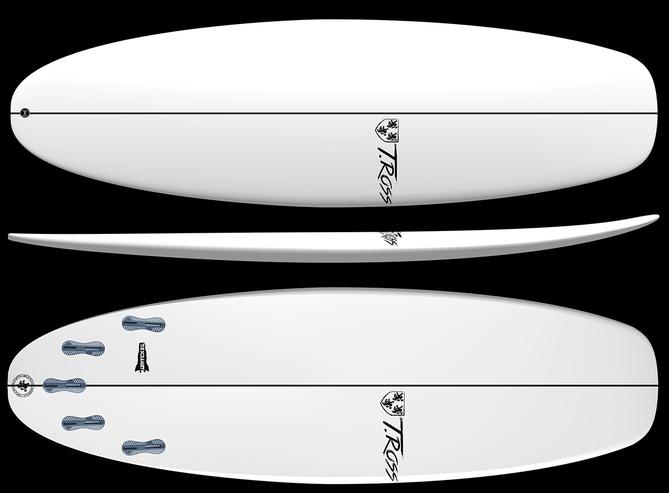